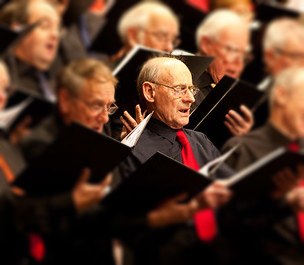 It is with great sadness that we have to tell you that Colin Wright, long-time member of Trianon, a keystone of our tenor section and a Vice-President of the Group, passed away at home on Friday 30 October. Colin had been gardening earlier in the day, so his death was entirely unexpected.

Despite having a heart problem which was addressed some three years ago, Colin had been generally well but like a number of people, was unable to take part in the January 2020 concert due to flu like symptoms; Since then he has sung with the Anglia Singers at their March concert.

His youngest daughter and wife spoke to Chris Green last evening, and he was pleased to be able to have a long talk with them both.and learn more about Colin, aged 91, despite having known him for decades.

The date of his funeral will not be known for a few days, but I have asked that Trianon is represented at the funeral.